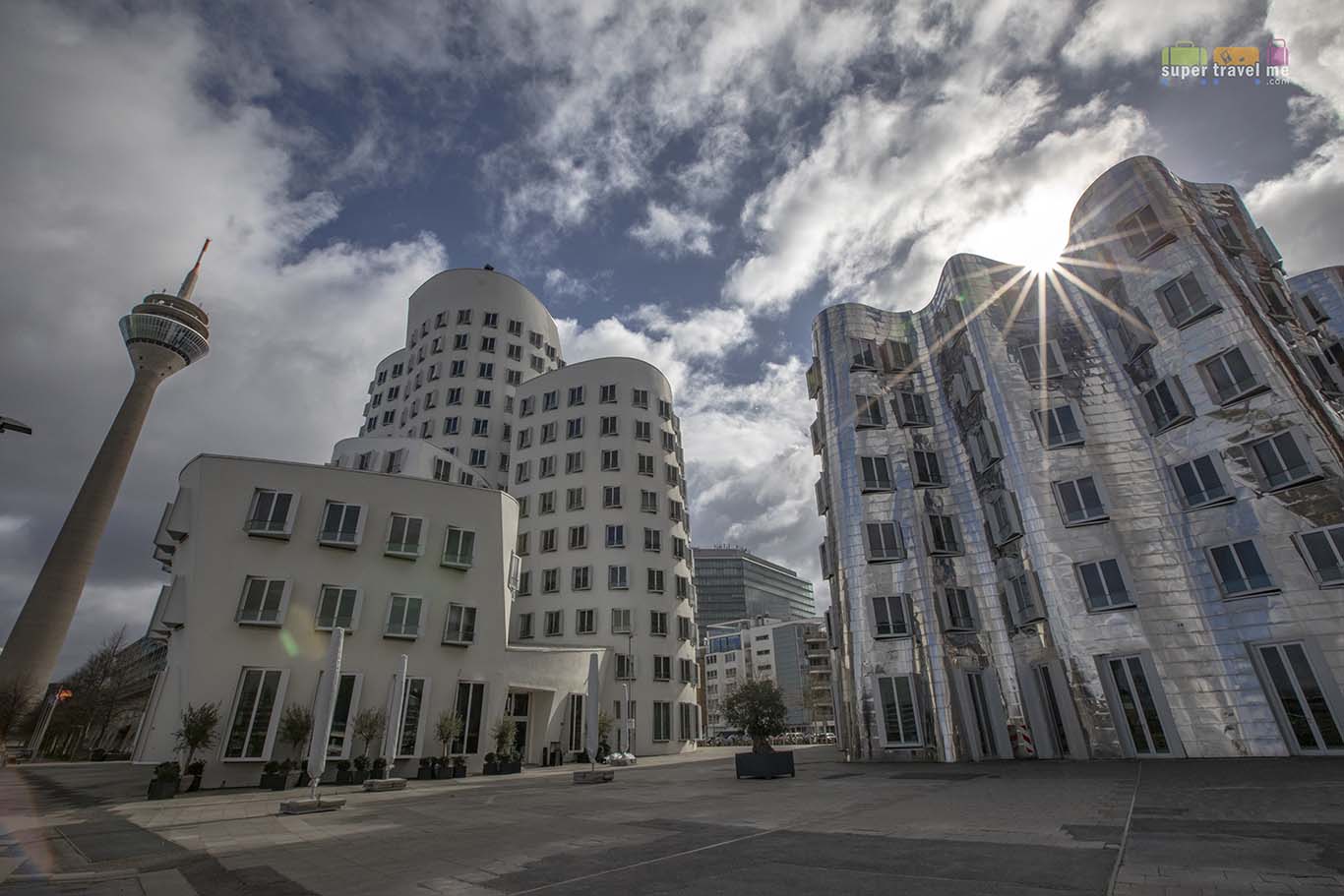 Düsseldorf is located in North Rhine-Westphalia, Germany. I visited this beautiful city during spring in end March this year and got to visit a few of the city’s beautiful spots. Whilst time didn’t allow me to explore the whole city, I got a taste of the food, drinks and life of this small city.

Düsseldorf’s location makes it perfect to travel on to other German cities such as Duisburg, Cologne or Bonn or to cities in other countries such as Brussels or Amsterdam by train.

But this story is about Düsseldorf. Look out for our other pieces of the other German cities we visited.

Pick up a DüsseldorfCard and get around Düsseldorf for free on the public transport as well as get up to 100% discounts on around 60 offers including guided city tours, museums and souvenirs. The DüsseldorfCard is valid for 24, 48, 72 or 96 hours. Single and Group DüsseldorfCard options are available. The Single card costs €10 for 24 hours, €15.50 for 48 hours, €21 for 72 hours and €26.50 for 96 hours. You can purchase the DüsseldorfCard from the tourist information offices at Alstadt (Old Town) and Central Station, Düsseldorf Airport at SkyTrain stops and around 80 Rheinbahn ticket vending machines.

1. Stroll Down the Königsallee

Königsallee in Düsseldorf is akin to the Orchard Road of Singapore. Known in short as the Kö, this stretch is a shopping paradise with luxury labels such as Karl Lagerfeld, Tiffany & Co., Bucherer, Bulgari, Jimmy Choo, MCM & Salvatore Ferragamo as well as luxury accommodation for travellers.

The west side of the Kö is home to luxury hotels including the 141 room & suite Steigenberger Parkhotel at 1 Königsallee and the Capella Breidenbacher Hof just down the road at 11 Königsallee.

The six-storey Kö-Bogen office and retail complex on the opposite side of the pond and the Hof-Garten, Germanys oldest public park from the Steigenberger has a beautiful architecture. Studio Libeskind is behind the design and their other projects include the Reflections by Keppel Bay & Corals at Keppel Bay in Singapore, World Trade Centre Master Plan in New York and the Dancing Towers and Tangent Facade in Seoul.

Carlsplatz used to be the former farmers market. Today it is a gourmet paradise for Düsseldorfers and tourists. The market has over 60 stalls and is opened every day except on Sunday.

Stop by for lunch or to buy souvenirs home for family and friends. We picked up quite a lot of cheese from here. You can also get your hands on exotic fruit or regional vegetables, freshly caught fish, meat and poultry, fresh bread and baked goods or other delicacies, confectionery and specialty coffees. Be romantic and buy your partner some fresh flowers.

3. Take a Stroll and Enjoy The Architecture at MedienHafen

Famous architects from around the world were given an empty canvas to make their creative contribution to Düsseldorf’s skyline. The MedienHafen is at the city’s harbour.

Around 700 companies have moved into this area which was a waste ground dominated by old warehouses about a decade ago.

The commercial harbour with its quay walls, stairways, cast-iron bollards, wrought-iron railings and rail tracks with cranes laid along the old loading road have been protected as historical monuments.

The Hyatt Regency Düsseldorf is just 0.8km from the Rheinturm tower and sits on the tip of a narrow strip of land of the harbour basin offering a perfect view of Media Harbour. Sop Archiitekten built the pedestrian bridge, two glass towers, a pavilion and a seven-storey office building. The hotel is in the east building featuring a timeless, tension-filled architecture.

Why not visit MedienHafen in the evenings and head over to DOX Bar in the hotel for some cocktails and a spectacular view of the MediaHarbour and skyline of Düsseldorf.

Go on one of Düssseldorf Tourism’s 120-minute MedienHafen Guided Tour priced at €13 for adults and 6.50 for children age 6 to 13. DüsseldorfCard gives you a 20% discount. English tours are conducted at 2.30pm on Saturdays while tours in German are available at the same time from Fridays to Sundays.

4. See Düsseldorf from the Rheinturm Tower

If you want a top view of Düsseldorf, you have to get that from the city’s tallest building. That would be the Rheinturm tower which is located A View of the Rheinturm and the North Rhine-Westphalia State Parliament Building. It is located on the edge of the southern city centre at the entrance of the Media Harbour.

The Rhine Tower was constructed in 1979 to 1981 as a telecommunications tower by H. Deilmann. The tower and its aerial antenna is 240.5 metres. The observation deck is 164 metres high. Enjoy the aerial view of the city and the River Rhine, MedienHafen, Alstadt, Hofgarten, Königsallee, North Rhine-Westphalia State Parliament Building, Westdeutschen Rundfunk Broadcasting Company building and bridges of the metropolis. And if it is a clear day, you can even see the Cologne Cathedral and the Bergisches Land mountain range.

The observation deck is open daily from 10am to 11.30pm. Free entry for children under six. DüsseldorfCard holders get a discount. Daily tickets cost €9 and early bird tickets €5.

One of the many attractions of Düsseldorf located in the North Rhine-Westphalia region of Germany is Altbier (translates to Old Beer to differentiate since the introduction of lager in the 16th century in Bavaria) and the ‘longest bar in the world’. It doesn’t really matter which part of the year you visit Düsseldorf to enjoy Altbier.

Altbier is brewed in six breweries in Düsseldorf. This beer has been around for centuries and its style has evolved over almost a hundred years. The Altbier consumed by Germans today was developed in the 19th century. Altbier uses the old process of brewing beer via top fermentation yeast instead to the much newer bottom-fermentation process.

Go on one of the Altbier Safaris and get inducted into the city’s beer culture. During the tour, your guide will explain to you the history of Altbier. You will be visiting five bars where the beer is brewed for some beer tastings. Whether you are travelling alone or with friends, this tour will give you better insights as well as the opportunity to mingle with other travellers interested in the craft of Altbier.

Read more about Altbier and the longest bar in the world here.

Killepitsch is a taste of Düsseldorf. The award-winning, premium herbal liqueur has been voted by an international jury again and again as one of the “Best Spirits” in the world. Over 98 organic herbs, berries and fruits are ripened in stainless steel tanks to create this 70-year recipe.

Killepitsch can be drunk as an ice-cold shot or cocktail such as a Ginger Pitscher, Düsseldorf Mule, Hafen Smash, Düsseldorf Dry or Schlendern auf der Kö.

Killepitsch is not for the lightweight. It has 42% ABV. You can visit El Kabüffke Killepitschstube just next to Haus Zum Helm Weine & Spirituosen in Düsseldorf enjoy Killepitsch cocktails and shots after getting a bottle or two from the alcohol store next door.

German mustards are simply amazing. And while you are in Düsseldorf, you have to get some of the local Löwensenf mustards which are available in many different flavours. Düsseldorf is known as Germany’s mustard capital

Visit the Düsseldorfer Senfladen at Berger Street 29, 40213, Düsseldorf, Germany. Sample the product before you purchase. It is walking distance from Carlsplatz.

Getting to Düsseldorf from Singapore