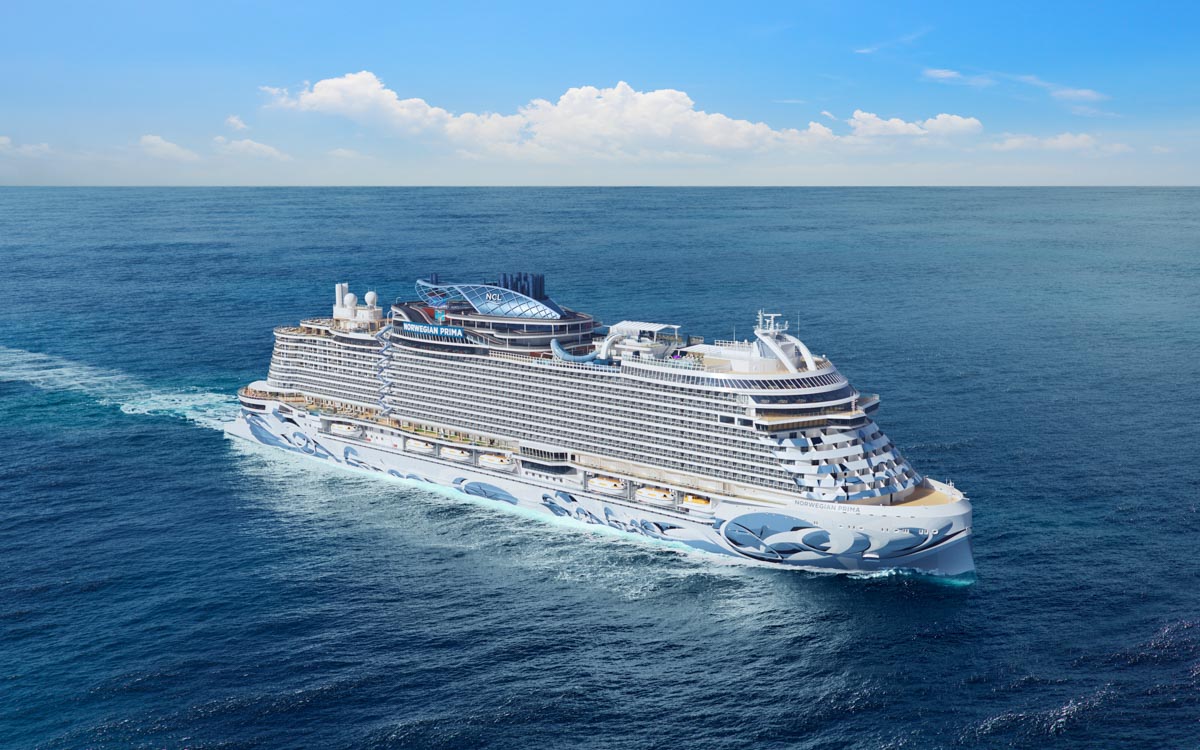 Norwegian Cruise Line (NCL) took delivery of the Norwegian Prima at Marghera, Venice at the renowned Fincantieri shipyard on 1 August 2022. Norwegian Prima is the first of six ships in NCL’s ground-breaking Prima Class of ships. The rest of the ships will be delivered through 2027.

NCL has been cruising for 55 years, revolutionising the industry by offering guests the freedom and flexibility to design their ideal vacation on their preferred schedule with no assigned dining and entertainment times and no formal dress codes. It has a fleet of 17 contemporary ships that sail to over 300 global destinations, including Great Stirrup Cay, the company’s private island in the Bahamas and its resort destination, Harvest Caye in Belize.

Onboard the Norwegian Prima

Norwegian Prima is 295 metres long, 142,500 gross tonnes, and has a capacity for 3,300 guests. She features wide-open spaces, thoughtful and stunning designs, and a variety of brand and industry-first experiences. She lays claim as the most spacious new cruise ship in the contemporary categories and offers the most outdoor deck space and expansive accommodations of any new build. Guests will enjoy elevated experiences and epicurean delights including the Brand’s first upscale open-air food hall, Indulge Food Hall; the largest and first three-level racetrack at sea on the Prima Speedway, as well as The Drop, the world’s first freefall dry slide offering a 10-story plunge experience that reaches more G-forces than an accelerating F1 race car.

The Ocean Boulevard wraps around the entire deck that is over 4,000 sqm. The Infinity Beach boasts two stunning infinity pools which are positioned close to the water level so guests can take in the vastness of the ocean with uninterrupted views. The Oceanwalk features two glass bridges offering a feeling of walking on air over water. The Concourse is the first outdoor sculpture garden at sea with six installations created by international metal artist Alexander Krivoseiw and an art wall designed by David Harber.

Norwegian Prima to be Christened by Godmother Katy Perry

Norwegian Prima will launch this August. It will be the first major cruise ship to be christened in the Icelandic capital of Reykjavik on 27 August 2022 and officially named by Norwegian Prima’s Godmother Katy Perry. She will commence her eight-day inaugural voyage to Amsterdam.

Norwegian Prima will sail a series of eight-day voyages from Amsterdam and Copenhagen, offering guests the opportunity to explore Northern Europe and the Norwegian Fjords. She will then sail  Bermuda from 10 October 2022; Caribbean itineraries from 15 October 2022; and Western Caribbean voyages from 11 December 2022 to 19 March 2023, before returning to Bermuda from 28 March to 7 May 2023. She’ll then offer cruises to Northern Europe from 14 May through 17 September 2023.

Norwegian Cruise Line is known for its unwavering commitment to bringing Broadway-caliber entertainment to the high seas, having previously debuted “Kinky Boots,” “Six,” “Jersey Boys,” “Footloose”, and more across its current 17–ship fleet. NCL offers shows such as “Summer: The Donna Summer Musical” alongside Noise Boys.

As part of the additional entertainment offerings on Norwegian Prima, the Brand will also debut live game show experiences that allow the audience to be part of the show and have an opportunity to win incredible grand prizes.

Last week, NCL announced the cast of its highly-anticipated headlining show, Tony Award-nominated musical “Summer: The Donna Summer Musical” which will premiere aboard the all-new Norwegian Prima in August. The musical is the story of Donna Summer and her prolific rise to fame. Watch the Queen of Disco at three of the most pivotal stages of her career: Diva Donna, Disco Donna and Duckling Donna. The 85-minute musical will feature over 20 of Summer’s mega-hits including “Bad Girls”, “Last Dance”, and “Hot Stuff”.

Kimberley Locke, season 2 finalist of “American Idol”, takes on her first theatre project at sea and will star in the breakout role of Diva Donna, playing Summer as she reaches the height of her career.

It is an incredible honor to play Donna Summer along a very talented cast in this highly-rated musical. Donna Summer’s inspirational story and pioneering talent led the way for so many of today’s brightest vocalists. She has left an immeasurable impact on music and culture, and I am excited to bring her story to guests around the world aboard the beautiful Norwegian Prima.

Valerie Curlingford will play Summer in her late teens and early twenties as she first finds success in the iconic 1970s disco era. The extraordinary talent from the Netherlands will take on the role of Disco Donna. Duckling Donna will show Summer as she grows up in Boston in the 1960s. The role is played by D’Nasya Jordan, who most recently starred as Little Inez in “Hairspray”.

These immersive productions take the Prima Theatre and Nightclub and transform it into a larger-than-life production set where guests can be participants in some of the world’s most iconic game shows, including “The Price is Right LIVE,” “Supermarket Sweep LIVE”, and “Press Your Luck LIVE.” The ship also features “Sensoria” — a Vegas-style nightclub party presenting a journey through Coachella, Woodstock and Burning Man, all in one.  Plus, guests will be able to experience the first “Improv @ Sea” Comedy Club, the guest-popular “Syd Norman’s Pour House”, and so much more.

Previous « Emirates to operate additional flight to London Gatwick with third daily service
Next Fly to India on Qatar Airways from Europe at up to 12% off in Economy. »