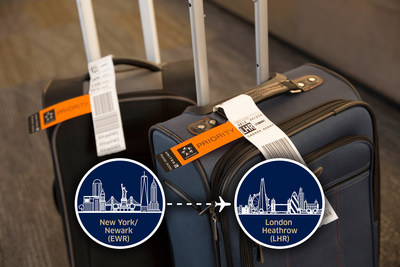 The first-of-its-kind service will allow customers the flexibility to start their London journey the moment they clear customs and drop their bags. After which they just have to follow signs for the bag drop desk in the arrivals area of London Heathrow which operates seven days a week from 6 am to 12 pm. Pre-registration for this service is not required. Marriott Bonvoy members will also be notified on the Marriott Bonvoy app that their bags have arrived at the hotel.

This service coincides with the airline operating its newly reconfigured Boeing 767-300ER on the route. This aircraft features an extended cabin of 46 United Polaris business seats and 22 United Premium Plus seats.

Other United services announced this year include:

From 4 December 2019, United Airlines will be launching PlusPoints, a new upgrade benefit for Premier Platinum and 1K members. Top tier members will receive a bank of points which can be used to upgrade on all flights across the airline’s global network.

Previously members used Regional Premier Upgrades or Global Premier Upgrades. Each RPU will be worth 20 PlusPoints and each GPU will be worth 40 PlusPoints. Members using one RPU today to upgrade from Economy to United First on domestic U.S. and North American flights will use 20 PlusPoints from their banks. A member using one GPU today to upgrade from Economy to United Polaris business class on international long-haul flights will use 40 PlusPoints.

Members can access the upgrades through united.com or mobile app instead of calling the airline.

Members will enjoy more flexibility. They get to decide how to use their upgrades with more opportunities to be upgraded. Points can also be used to join upgrade waitlists on multiple trips. These points won’t be deducted until the upgrade is confirmed. Upgrading to and from Premium Economy will become more flexible. Upgrading from Economy to United Premium Plus and from United Premium Plus to United Polaris Business Class will be possible for less than the value of one GPU.

Premier Platinum members will now receive enough PlusPoints to upgrade from Economy to United Polaris business class, while Premier 1K members will be able to upgrade from discounted Economy fares to Polaris. From time to time, United may also allow 1K members the opportunity to use additional PlusPoints to skip the waitlist and receive a confirmed upgrade at booking when travelling on select international long-haul flights, even when upgrade fare classes are closed.

PlusPoints does not replace or change United’s Complimentary Premier Upgrades benefit. All Premier members will continue to be placed on upgrade waitlists for flights operated by United and United Express when available.

Miles on a Mission

United Airlines has also launched ‘Miles on a Mission’, a new crowdsourcing platform to donate miles to non-profit organisations and charities in need of air travel.  12 launch partners including the likes of Transplant Life Foundation, Operation USA and Waves for Water have been selected. Each has 28 days to crowdsource miles from MileagePlus members with the goal of reaching at least 250,000 miles

Other initiatives by the airline include repurposing items from the airline’s premium cabin amenity kits and partnering Clean the World to donate hygiene products to those in critical need.

It is also the first airline to fly with Boeing’s Split Scimitar winglets, which reduce fuel consumption by an additional 2 percent versus standard winglets. Nearly 400 aircraft are fitted with these winglets. It has eliminated non-recyclable plastic stirring sticks and cocktail picks on its aircraft and replacing them with a more environmentally friendly product made with 100% bamboo.

United launched Her Art Here contest in February this year, giving female artists such as Tsungwei the chance to use an airplane as their canvas. This contest designed to find and uplift underrepresented women artists by providing a chance to have their work painted on an airplane as a canvas.

The Her Art Here contest was open to those who identify as a woman, including cisgender, transgender, woman-aligned or non-binary and reside in the United States. New York/New Jersey or California, the two key markets for the airline had to be visually represented, in their own style, while combining the company’s mission and what the communities in each region mean to the artist. A panel of judges scored the entries based on contest criteria and winners were determined based on a combination of judging scores and public voting.

Tsungwei’s creation was also shaped by her personal journey. She grew up in Taipei before emigrating to San Francisco 14 years ago aboard a United Airlines flight.

Before taking to the skies, United’s Her Art Here California plane spent time in Amarillo, Texas where it took 17 days for painters to transform the Boeing 757 into Tsungwei’s winning design.

United Airlines Bombardier CRJ-550 took to the skies 27 October 2019 from Chicago O’Hare to Harrisburg in Pennsylvania. The CRJ-550 is the world’s only 50-seat regional aircraft to offer true first-class seating and other premium amenities including space for every customer to bring a roller bag on board, a self-serve refreshment centre for United First customers featuring a wide assortment of snacks and beverages, more overall legroom per seat than any other 50-seat aircraft flown by a US airline and the ability to stay connected while in flight with United Wi-Fi.

Initially, the CRJ 550 will fly between Chicago O’Hare and:

Additional cities will be added over the coming weeks from United hubs in Chicago, New York/Newark and Washington Dulles.