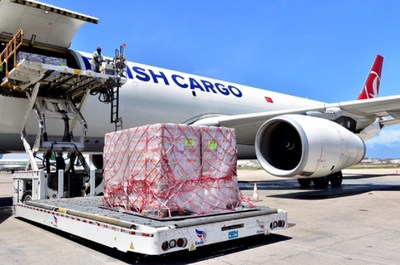 Turkish Airlines serves 51 routes in the African continent and is giving back to those countries which have some of the challenging places in the world. It joins Love Army for Somalia which is spearheaded by social media stars Jerome Jarre, Casey Neistat and actor Ben Stiller in delivering aid to fight famine and drought in Somalia. 60 tonnes of supplies have been delivered to Somalia since the beginning of the movement in March this year when social media celebrity Jerome Jarre sent a Tweet to Turkish Airlines whether they should send a cargo plane filled with food to Somalia. Turkish Airlines is the only international airline that flies to Somalia where millions of children are at immediate risk of severe malnutrition.

The airline has sent another 60 tonnes of nutritional supplements for children has been delivered to Somalia on 15 August 2017.

Speaking on the occasion, Turkish Airlines Chairman of the Board and Executive Committee Mr. M. İlker Aycısaid; “As the first call of help to Somalia echoed in social media, Turkish Airlines immediately took notice. We gladly joined the global movement #LoveArmyForSomalia, contributing a cargo flight as well as food and supplies to the people of Somalia. Now, we are doing it again, this time delivering 60 tons of special food for Somalian children. As we take pride in connecting Africa to the world, we also take pride in our corporate responsibility projects that extend a helping hand to the African people.”

Social media star Jerome Jarre said that; “What is fueling this movement are people around the world coming together. We are united by the idea that anything is possible if we work together to make it happen.”

Turkish Airlines has also contributed in 24 African countries in building and renovating schools, orphanages, clinics and providing education and drilling water wells. It has set up solar panels for clinics situated outside the urban areas and cooperated with local authorities to provide medical aid.