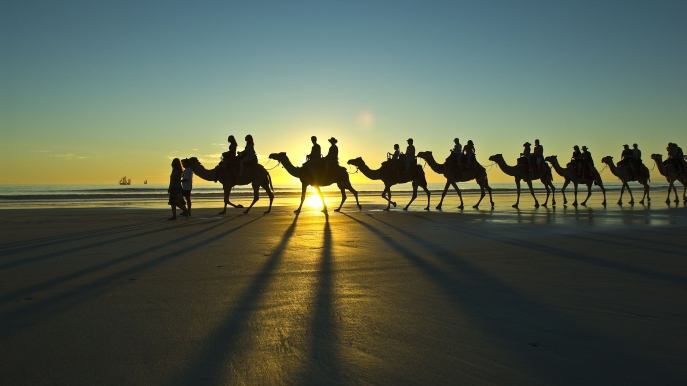 Broome is located in Western Australia. You can ride a camel at Cable Beach and enjoy the amazing sunset views or relax with a beer at Broome’s Matso’s Brewery and enjoy award-winning beers such as Smokey Bishop dark lager, Hit The Toad mid-strength, Pearler’s Pale Ale, Mango Beer or Matso’s famous alcoholic Ginger Beer.  There is also a Japanese Cemetery in Broome where over 900 pearl divers are interred here. Shop for pearls at Broome’s Chinatown or head to the Sunday markets in Johnny Chi Lane. Buy some indigineous art at Short Street Gallery in Chinatown. Foodies should head over to Brizo Restaurant at Pinctada Cable Beach Restaurant and Spa or the much loved Wharf Restaurant to enjoy the local mud crab which is best eaten with chilli. Shop for crafts, jewellery and fresh produce or just relax on the grass and listen to a didgeridoo performance at the Courthouse Markets. Camp in luxury at Eco Beach resort, a 90-minute drive south of Broome.

“While the current deal with SilkAir is for four return trial flights, we are hopeful that the demand for the service will be high and lead the way for further services in the future,” commented Tourism Minister Paul Papalia. “Tourism is vital for the State’s economy generating more than $10 billion a year through visitor spend and supporting 109,000 jobs. That’s why it is at the centre of the State Government’s plan to create jobs and further grow the economy.”

Fares and flight schedules will be released soon and Broome-based Australia’s North West Tourism will work with SilkAir to develop packages for travellers. Tickets will be available on SilkAir’s online reservation system and Tourism Western Australia will promote the flights and deals through its Singapore office.