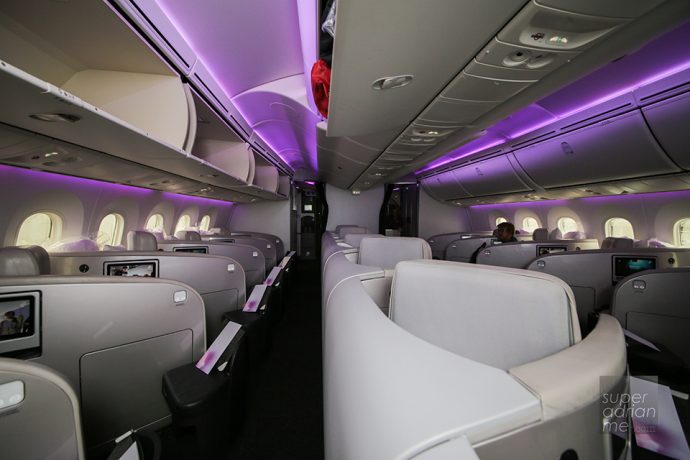 In May 2019, I visited Auckland where I stayed at the swanky SO/ Auckland. That got me the opportunity to fly on Air New Zealand’s Business Premier on flights NZ281 and the return flight NZ284. Air New Zealand operates the Boeing B787-9 aircraft between the two cities and I first flew on Air New Zealand in 2015 in Premium Economy then. Read our story in superADRIANme.com.

In November 2019, Air New Zealand received AirlineRatings.com’s Airline of the Year award for the sixth time. The panel of seven judges with over 200 years of aviation experience assess airlines on 12 key criteria for the awards annually, including customer reviews, product offerings, safety, fleet age, profitability and environmental leadership.

2020 marks Air New Zealand’s 80th anniversary. The airline will be launching non-stop Auckland – New York service in late October 2020. It will also be introducing a more spacious Economy Stretch product on its widebody aircraft on long haul flights from late 2020. The Boeing 777-200, 777-300 and 787-9 aircraft are being reconfigured to fit a stretch zone at the front of the Economy cabin with up to 42 of these spacious seats. The current Economy seat with sculptured upholstery and flexible headrests will be used for the new product.

Air New Zealand and Singapore Airlines will boost capacity between Auckland and Singapore with an additional 35,000 seats between 24 March 2020 to 24 October 2020. Operating on its Boeing 787 Dreamliner aircraft, the two alliance partners will operate 21 flights per week. Singapore Airlines will deploy its larger A380 aircraft to meet stronger demand over the Easter 2020 peak, replacing its scheduled Boeing 777-300ER aircraft. The joint-venture service schedule is as follows:

New Zealand has introduced the New Zealand Electronic Authority for visa-waiver countries including Singapore since 1 October 2019. Remember to apply for your NZeTA even if you are just passing through on the way to another country. Visit www.immigration.govt.nz/nzeta for more information.

Air New Zealand’s Business Premier cabin and herringbone seats are not the usual business class cabins we see in other airlines today. And that’s why the instructional video on how to make the best out of your seat for a comfortable flight on the in-flight entertainment screen comes in really handy.

Whilst the 18 fully lie-flat seats have direct aisle access and the cabin is configured 1-1-1, seats on A and J are angled 45 degrees towards the seats on K. This is one of two versions of Air New Zealand’s B787-9 Dreamliner cabin configurations. I flew on seat 3K of the six-row Dreamliner from Singapore to Auckland on flight NZ281.

For the return flight from Auckland to Singapore, NZ284 was operated on version 2 of the Boeing 787-9 Dreamliner with nine rows of the 1-1-1 configuration in Business Premier.

I picked 7K just to find out if it was going to be awkward with guests in seats across from me facing me. The cabin was not full, so the seats across from me were empty. It did not feel as awkward as it was when we flew in the 19-year-old British Airways Club World seats in April 2018. I guess I could get used to it after a while. Even I wouldn’t bother to look at the person across from me. But couples flying together would probably have to decide to sit across from each other or next to each other. Either way, you won’t be able to hold hands to sleep.

With three more rows in the cabin than in my previous flight, it did feel more spacious in the cabin. But a tip for those who prefer more privacy, take the seats in A. Because you will look at the back of rows J.

With this type of seat configuration, the windows tend to be behind your seat which means you have to make awkward body shifts to look out the window. Also dim the window seats to reduce the glare when you are watching any programmes on the in-flight entertainment screen which sits snugly at your side. Extend it fully by pressing a button and you can adjust your screen to your desired height.

I do enjoy the privacy of not having the person sitting next to you overlooking your laptop or in-flight entertainment screen. Anyone who walks past you would also not be able to overlook your screen. Window seats in Business Premier rock.

The bedding and comforter are placed behind your seat. You can help yourself to set up your own bed when you are ready to sleep. Or you can request the assistance of a friendly cabin crew.

The food and beverage served on board has been very satisfying. Given that the flights are over 10 hours meant that two meals and a snack would be served for each sector. That’s four meals roundtrip.

Air New Zealand serves Laurent-Perrier Brut NV as well as a selection of premium New Zealand and international beers (Emerson’s craft beer Steinlager Pure, Steinlager Mid, Stella Artois and Mac’s Apple Cider), spirits as well as port & liqueur. Juices and soft drinks including Coke are available onboard. And if you enjoy a hot cuppa, then you will be delighted to know that freshly brewed tea and coffee, hot chocolate and a selection of herbal teas are available too.

A light refreshment of Sandwiches or tarts and cakes are served in between the two main meals and a selection of snacks is available throughout the flight. And a hot cup of tea, as well as lots of water anytime during the flight, was important to stay warm and hydrated.

Before boarding my flight at Changi Airport, I visited Singapore Airlines’ Silver Kris Lounge at Terminal 3 and had my fill of my favourite Chwee Kueh – steamed rice cake with preserved radish.

Air New Zealand Business Premier guests enjoy complimentary access to the Silver Kris Lounge which differentiates itself from the Krisflyer Lounge (for Star Alliance Gold members) with a better selection of food and beverage, more space, a bathroom and shower facilities amongst other amenities.

Shortly after the flight took off, breakfast was served. I had a smoothie to go with fresh fruit salad and fruit yoghurt and a bowl of muesli with fresh milk. A croissant with marmalade accompanied.

I eventually picked the wok-fried egg noodles. Asian food is my comfort food, so I decided that I would pick an Asian dish for all my mains. That would be the benchmark for the inflight catering.

I got some work done on my laptop, read a few chapters of Steven Laine’s Root Cause novel, had a few winks and then woke up for dinner. The three-course meal started with seared Ahi tuna with sesame, radish, Japanese pickles with coconut jelly and kaffir lime. I could not resist the hot garlic bread so I had two of that.

The Chinese style grouper was a very flavourful dish. The savoury sauce was well balanced and complemented by the rice and vegetables. I was pleased with my choice of mains.

I came home on NZ284, a morning flight that boarded at 9.20 am. We had departed from SO/ Auckland, our home for 3 nights early in the morning. The night before we had dinner with a view atop the Grand Mercure Auckland’s VUE Restaurant where Executive Chef Daniel Na prepared us a feast. After that, we headed over to a nearby bar for some drinks before heading back.

Lunch was served after take off. I had the tea-smoked salmon with couscous, crispy shallots and pineapple, grapefruit and tomato salad. The generous portion of the appetiser almost killed half my appetite. Or perhaps that could have been the result of imbibing too many glasses of Laurent-Perrier Brut NV champagne.

There were two very Asian choices for the mains. It was either the aromatic Malaysian fish and tomato curry with lemongrass, sticky rice and pickled vegetable salad or the Singaporean seafood laksa with fish ball, egg noodles, tofu puff, boiled egg, crispy shallots and green onions.

I chose Laksa. I was craving for something soupy. When I put the first spoonful of laksa into my mouth, I was initially disappointed because it wasn’t the laksa I was used to. The thicker soup was like a mee rebus sauce usually created with sweet potato and fermented soybean paste. It was sweet and thick and I hadn’t eaten mee rebus for a while. So I was pleasantly surprised by the taste of the laksa. I didn’t mind mee rebus.

I was too full after the Laksa, even though the portion wasn’t large. So I gave the spiced apple crumble ice cream with butterscotch sauce and oat crumble or the coconut cream tart with mango jelly and passionfruit cream a miss.

I slept through most of the way home. Woke up for dinner and had the smoked duck breast with pickled pear relish and walnuts, roasted garlic with horopito aioli and a slice of spelt sourdough loaf with Hawke’s Bay extra virgin olive oil.

I made the correct choice of ordering the triple cooked pork belly, XO sauce with chilli, soybeans, shiitake mushroom, pak choy and steamed sticky rice. The rice was fluffy and slightly sticky. The way I enjoy my rice.

The last two things I ate on that flight home were two desserts. I couldn’t decide which one to order and the kind flight attendant offered me. It was “why not have both” and a big smile that made me cave in.

The Dark Chocolate delice with raspberry coulis was the richer of the two desserts. The Pain d’espice mousse with crystalized ginger and ginger gel was light and a perfect ending to dinner but absolutely delightful.

The amenity kit wash bag is made from a soft material which has become my favourite pouch I carry with me till today. It fits a wallet, phones, power bank and housekeys.

New Zealand skincare brand Ashley & Co products are included in the kit. A 15 ml Lip Punch tube containing beeswax, arnica and argan oil is perfect for chapped lips in the dry cabin air. A 30ml Soothe Tube helps hydrate dry hands with moisturising contents including shea butter, chamomile and vitamin E. A 20ml White Glo Refresh mouthwash is included so you can keep your breath fresh when you disembark. Socks and eyeshades are also provided.

Air New Zealand has thoughtfully included a small pen in the amenity kit. Great for filling up immigration cards or writing a thank you note for the aircraft crew.