LOT Operates Dreamliner on Singapore – Warsaw Route From 15 May 2018 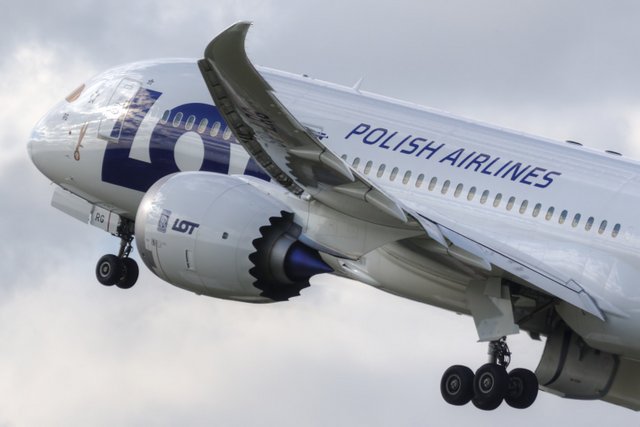 LOT Polish Airlines, a Star Alliance member airline, will be introducing thrice-weekly flights between Warsaw, the capital of Poland and Singapore from 15 May 2018 operated on the Boeing 787 Dreamliner. LOT held a pre-launch reception in Singapore on 11 December 2017 together with the Embassy of Poland in Singapore and Polish Tourism Organisation. The reception was attended by Mr Calvin Phua of Singapore Ministry of Transport, trade and media partners. 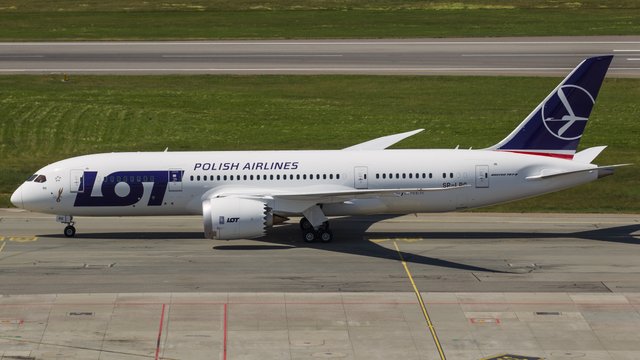 LOT flight LO67 will depart Warsaw (WAW) at 11 pm on Tuesday, Thursday and Saturday and arrive at Singapore Changi Airport Terminal 2 (SIN) at 5.15pm the next day. LO68, the return flight will depart Singapore at 12.05 am on Monday, Thursday and Saturday and arrive in Warsaw at 6.15 am. In July 2018, an additional flight will be added departing Warsaw on Monday and depart Singapore on Wednesday. The flight takes approximately 12 hours to cover the 9.5 thousand kilometres to travel between Singapore and Warsaw. 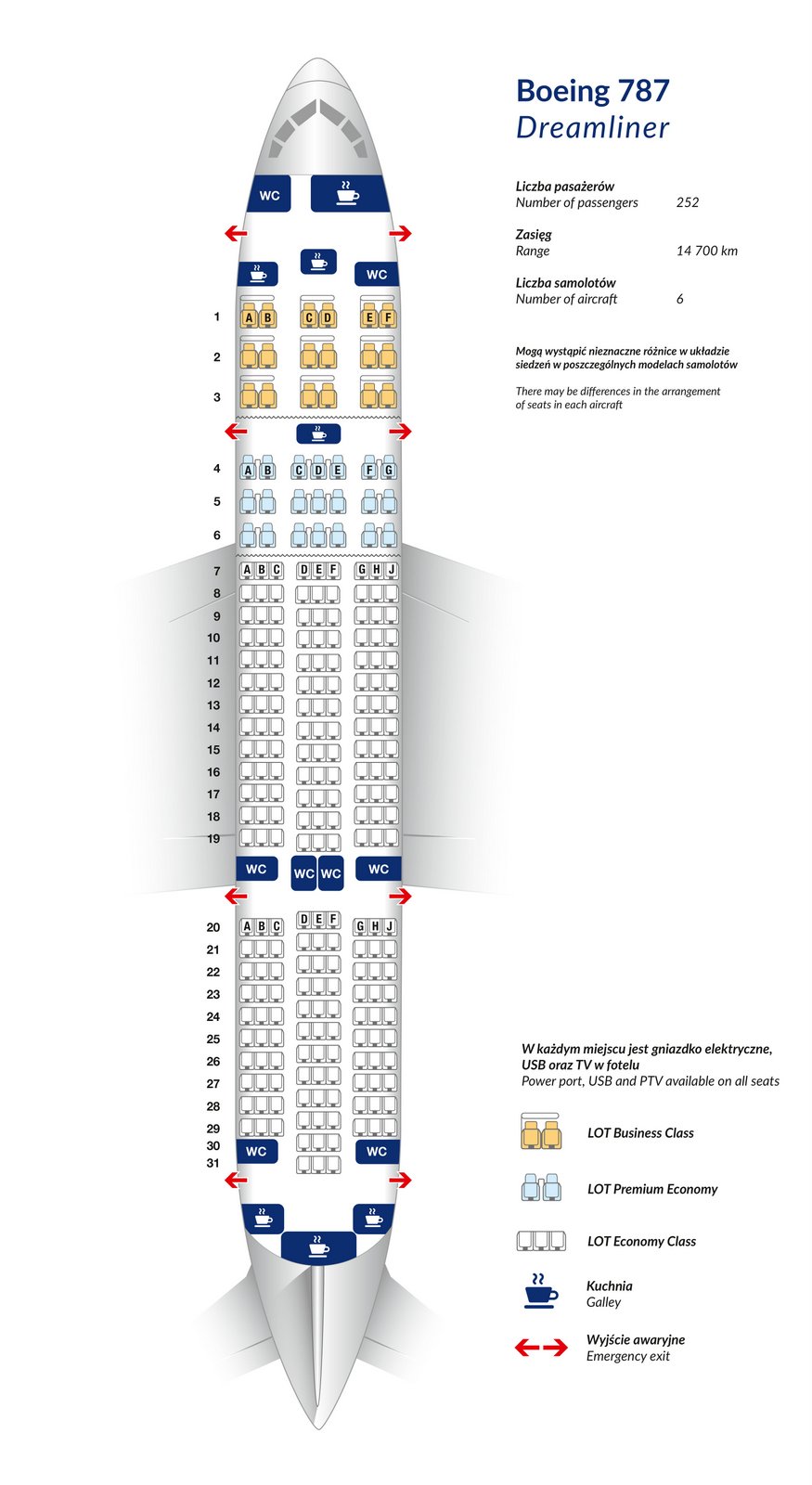 LOT’s B787 Dreamliner has a three-class cabin that can transport 252 passengers in Business, Premium Economy and Economy. The blue cabin colours give customers a relaxing environment that resembles the blue skies when flying.

There are 16 seats in business class from rows 1 to 3 with a 2-2-2 seat configuration. The full flat seats have a direct full leg rest that doesn’t require you to angle your legs to a corner for maximum comfort. These seats remind me of the Air India B787 Dreamliner Business Class seats. Each seat comes with 15.4″ screens, USB ports, electrical plugs and headphones. Business Class passengers are also given an amenity kit, blanket, pillow, vanity bag and bed sheet.

In Premium Economy, the 21 seats from rows 4 to 6 are in a 2-3-2 configuration. The seats feature adjustable headrests and footrests as well as individual 10.6″ screens, USB ports, electrical plugs and headphones. The seats are 54 cm wide. There are no restrooms in the Premium Economy cabin. Customers in this cabin have to walk to the toilets behind row 19 in Economy Class.

The 215 Economy Class seats are configured 3-3-3. Rows 7 to 19 are in the front cabin and the window seats have a view of the wings. Rows 20 – 31 Are in the back cabin. There are six toilets in Economy Class. The seats are 43 cm wide and feature adjustable headrests, individual 8.9″ in-flight entertainment screens, USB ports, electrical plugs and headphones. Meals and non-alcoholic beverages are provided on board. 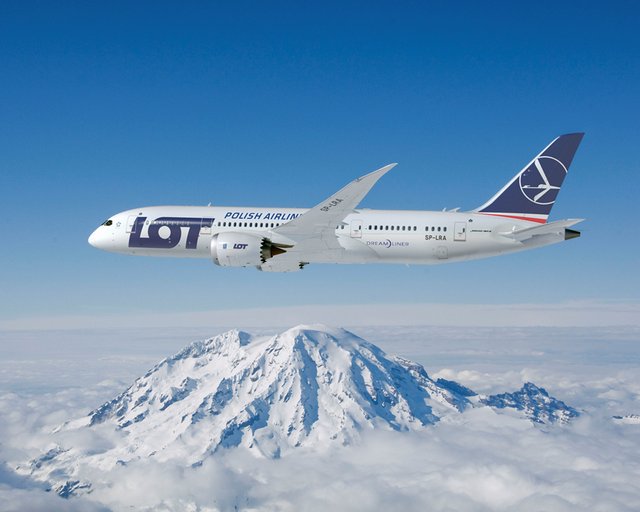 LOT has launched 23 new routes in 2017 including to Tokyo and Seoul. Last year it also announced the launch of another 20 routes including from Warsaw to Los Angeles, Newark and Astana and from Cracow to Chicago.

Warsaw is the capital of Poland, filled with greenery, non-regulated riverbanks and numerous parks even in the central park of the city. It is known for its ultra-modern museums such as the Fryderyk Chopin Museum, the Warsaw Uprising Museum, the Museum of Modern Art, Centre for Contemporary Art Ujazdowski Castle and the Museum of the History of Polish Jews. Every five years, Warsaw hosts the International Chopin Piano Competition. You can also enjoy music every summer weekend in the Lazienki Park. Other notable music events in Warsaw includ e the International Festival of Contemporary Museum “Warsaw Autumn” at the Philharmonic Hall, summer open-air “Jazz na Starówce”, the “Noc Pragi” in May or the Święto Saskiej Kępy” in June. Visit warsawtour.pl/en for more information about the city.

Pick up a Warsaw Sightseeing Pass if you are travelling unescorted. The pass offers free admission or special offers to many attractions including the Chopin Museum, Viewing Terrace on the 30th floor, National Museum in Warsaw, Copernicus Science Centre, Heavens of Copernicus Planetarium, Museum of the History of Polish Jews, Polin, Legia Warsaw Stadium, Praga Museum of Warsaw, Museum of Warsaw and a Piano Concert at Warsaw old town. You also enjoy priority access to the ticket office in each attraction. The pass is sold with or without public transport options and start from EUR29.90. Passes can be purchased online and collected at Tourist Information Centres at the Airport, and elsewhere in the city.

Discover the knightly past and aristocratic luxuries of Poland. Start with the Royal Castle in Warsaw and then explore the other cities throughout  Poland.

You could book yourself onto Costsaver’s Highlights of Poland Summer 2018. The US$1,440 11-day tour brings you to Warsaw, the medieval old towns of Gdansk, Wroclaw and Kraków and Auschwitz. The trip is inclusive of 10 nights accommodation, 10 buffet breakfasts and four three-course dinners and on-trip transport. Departures for this tour is on 30 June 2018.

Insight Vacations also offers a more luxe version of the Highlights of Poland Summer 2018 from US$2,205 per person excluding flights. Book a flight from Singapore to Krakow via Warsaw on LOT. Start the tour from Krakow. This tour lets you appreciate the wealth of medieval fairy-tale cities and scenic wonders while you enjoy the warm-hearted hospitality of the Polish people.