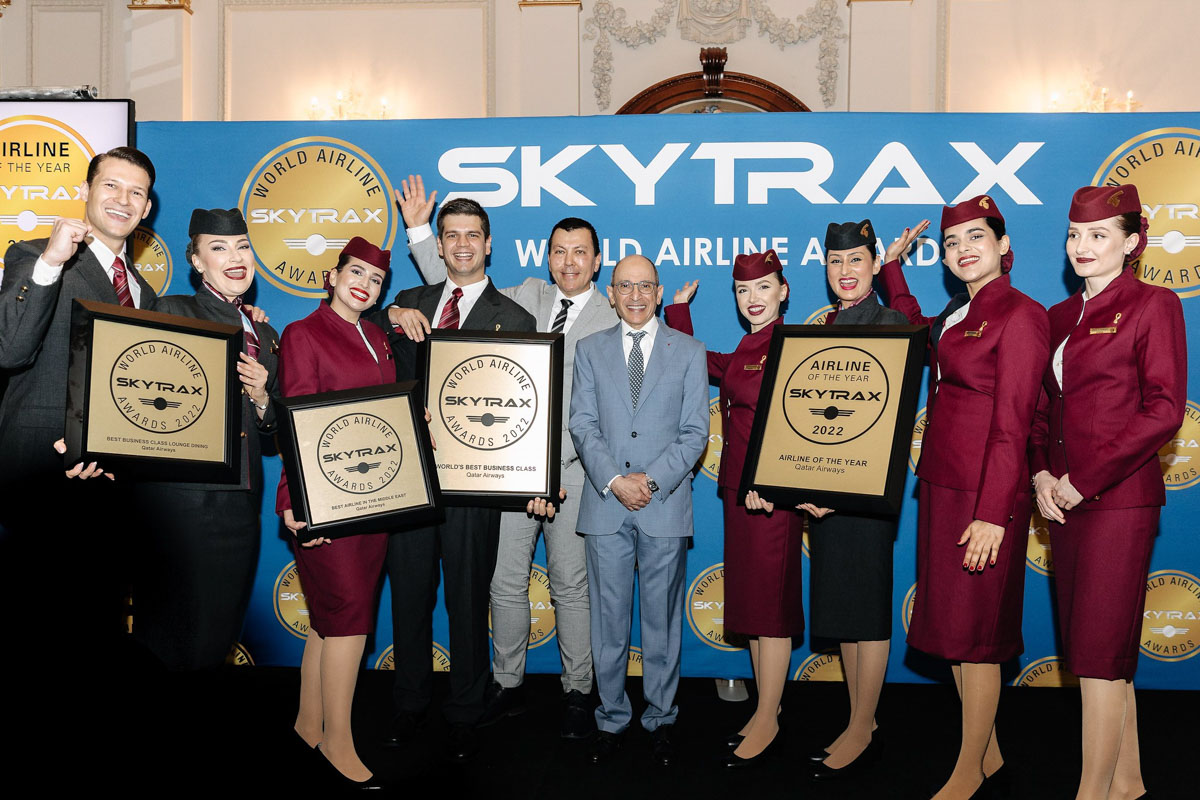 In the 2022 World Airline Awards, Qatar Airways has been voted the world’s best airline for the seventh time. The awards ceremony was held at the Langham Hotel in London on 23 September 2022.

Economy Class customers can snuggle up in warm and soft sustainable blankets made of 100% recycled plastic bottles. The airline also offers sustainably-made amenity kit bags for Economy Class customers on select long haul flights, which have been newly redesigned to represent the four elements – fire, water, earth and air, as a reminder of the careful balance required to preserve for the future of our planet. The kit’s travel essentials – socks, eyeshades, toothbrush and tooth paste, as well as bookmark, are all made from environmentally-friendly materials and come in natural earth tones.

Little flyers travelling across all classes can also keep busy with special plush toys and blankets as well as a selection of ‘fly with me’ belt bags, duffle bags and backpacks. All children’s items and toys have been consciously made of 100% recycled raw materials including drinking bottles, and swing tags use non-toxic soy based ink printed on recycled cardboard.

All Nippon Airways was awarded the World’s Best Cabin Cleanliness for the fourth time, World’s Best Airport Services for the ninth time, and Best Airline Staff Service for the seventh time. Here are some recent milestones for the airline. The new “ANA Lounge” at Narita Airport Satellite 2 features a special design with directions from the world-famous architect Keng Kuma. The ANA SUITE LOUNGE at Haneda Airport and Narita Airport for International Flights offer “SUITE DINING”, a new set meal service that provides different meals depending on the time of day, as well as a “meal order system” that allows guests to order meals from their smart phones or devices. “ANA Smart Travel” is a new service model that combines in-person and digitised services to provide a smooth travel experience. ANA Travel Ready offers advanced screening of necessary travel documents for smooth travel on the day of departure for international flights.

“We are very pleased to be with you again in this environment where our distinguished service approach has been appreciated many times. As the Turkish Airlines family, we would like to thank our valued passengers, who deemed us worthy of these wonderful awards, and the Skytrax team, who put this evaluation into practice. With our privileged service approach, which distinguishes us from our competitors, we continue to take firm steps towards our goal of making the Turkish Airlines brand the best in the world by building on the unmatched service we offer,” said Turkish Airlines Chairman of the Board and the Executive Committee Prof. Dr. Ahmet Bolat

Air France was voted best airline in Western Europe for the second year running. It moved up two places to 8th position in the Skytrax global ranking. With new-generation aircraft with reduced fuel consumption, renovated and more comfortable travel cabins, new airport lounges, refined French gastronomy and more, these investments that have been preserved to ensure that Air France continues to move upmarket.

“We are truly honoured to be awarded the prestigious Skytrax World Airline Awards for the sixth time, consecutively. Having awarded 2022’s Best Independent Airport Lounge Brand for Plaza Premium Lounge is a testament to our service excellence. The past two years have been challenging for the travel industry due to the pandemic and we would like to dedicate this win to all our colleagues who have been the backbone of our company. They have been our biggest supporters and have really put in their hard work and dedication despite the challenges we’ve been through. We are really proud of this achievement and we will continue to provide award-winning hospitality services across our global network,” said Plaza Premium Group Founder and CEO, Song Hoi See.

“We are elated to learn that millions of flyers around the world have put their trust in Star Alliance yet again and have recognised the exceptional value the alliance offers through their journey. As we celebrate our 25th anniversary this year, the recognition means even more to us. As we navigate through one of the most difficult periods for our industry, it is the grit and hard work of the Star Alliance team and the staff of our member carriers that has enabled seamless travel despite the constantly changing environment. I receive this honour on their behalf,” said Star Alliance CEO Jeffrey Goh.

Check out the top 100 listing here.

Ever since the Covid-19 pandemic started, customers are more aware of hygiene and cleanliness standards. Japan’s All Nippon Airways clinched the World’s Cleanest Airline, with Singapore Airlines in 2nd and Japan Airlines 3rd. This is the fourth time ANA has received this award.

The airline was recognised for its cleanliness procedures – Flight attendants wore masks and distributed disinfectant wipes, masks upon request, providing hygienic in-flight services; thorough ventilating the aircraft cabins and periodic disinfecting of the cabin as well as installing special handles on lavatory doors that allow passengers to exit the lavatory using their elbows.

AirAsia was named the World’s Best Low-Cost Airline for the 13th consecutive year. Tony Fernandes, CEO of Capital A, who received the award said “We did it again! This year feels more special than previous years, as voters supported us despite the most difficult past few years triggered by Covid. The fact we are back in the sky is incredible in itself with no big business benefactors and virtually no flying for close to two years.” Tony has dedicated the award to his team of Allstar for their unwavering can-do spirit and attitude.